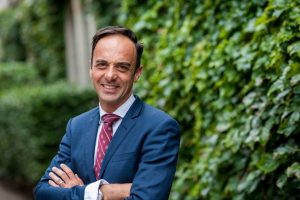 Dr Mark Schembri is a leading multidisciplinary educator, academic and practitioner in both human and animal medicine. A practicing Doctor in Women’s Health at Royal North Shore Hospital and Veterinarian with the Australian Turf Club, his career highlights include a Master in Public Health degree (Infectious Disease Epidemiology) at Harvard and selection as Veterinarian to the Australian Equine Team at the 2008 Beijing Olympics.

Having taught in the Sydney Catholic secondary school system, and lectured for a decade at the University School of Veterinary Science, Dr Schembri has developed a passion for nurturing curiosity and creativity amongst students in the early stages of their academic careers. This experience has been solidified through thirteen years in pastoral care positions at university colleges in Australia and overseas.

Dr Schembri is also a board member of Sydney University Football (Rugby) Club, Vice-President of the Royal Agricultural Society of NSW, and is Chairman of the National Selection Panel for the Sir John Monash Scholarship.

Dr Schembri will officially take up the position of Rector in July 2022.

It gives me great pleasure to inform the College community that Dr Mark Schembri has been appointed as the next Rector of St John’s.

Dr Schembri has more than 13 years’ experience in pastoral care positions in residential colleges at UNSW, Harvard and the University of Sydney, where from 2012 until 2019 he served as Deputy Head of College at St Paul’s.

A graduate in both Veterinary Science and Medical Science, with a Masters’ degree in Public Health from Harvard, Dr Schembri’s career has taken him around the globe – from Dubai to Royal Randwick and to the 2008 Olympics in Beijing, where he was Veterinarian for the Australian Equine Olympic Team. For the past four years he has practised medicine at Royal Prince Alfred and Royal North Shore Hospitals.

Dr Schembri also serves in a volunteer capacity with a number of sporting and community organisations, including as Vice-President of the Royal Agricultural Society (NSW) and a board member of Sydney University Football (Rugby) Club.

The appointment of a new Rector was made after an exhaustive search, and the selection committee was overwhelmed with the quality of the shortlisted applicants.

On behalf of Council, I would like to extend a very warm welcome to Dr Schembri, his wife Sarah and their children Abigail, William and Georgia, who will move to St John’s when Mark takes up the position of Rector in July. As we informed you last year, Adrian Diethelm will stay on in the position of Vice-Rector, allowing the College to continue to benefit from his experience into the future.

We are delighted to announce this major milestone in the history of St John’s, and over the coming months we’ll be conducting a series of events to welcome Dr Schembri to the College. If you’d like to be involved, you can register your interest by emailing our team.