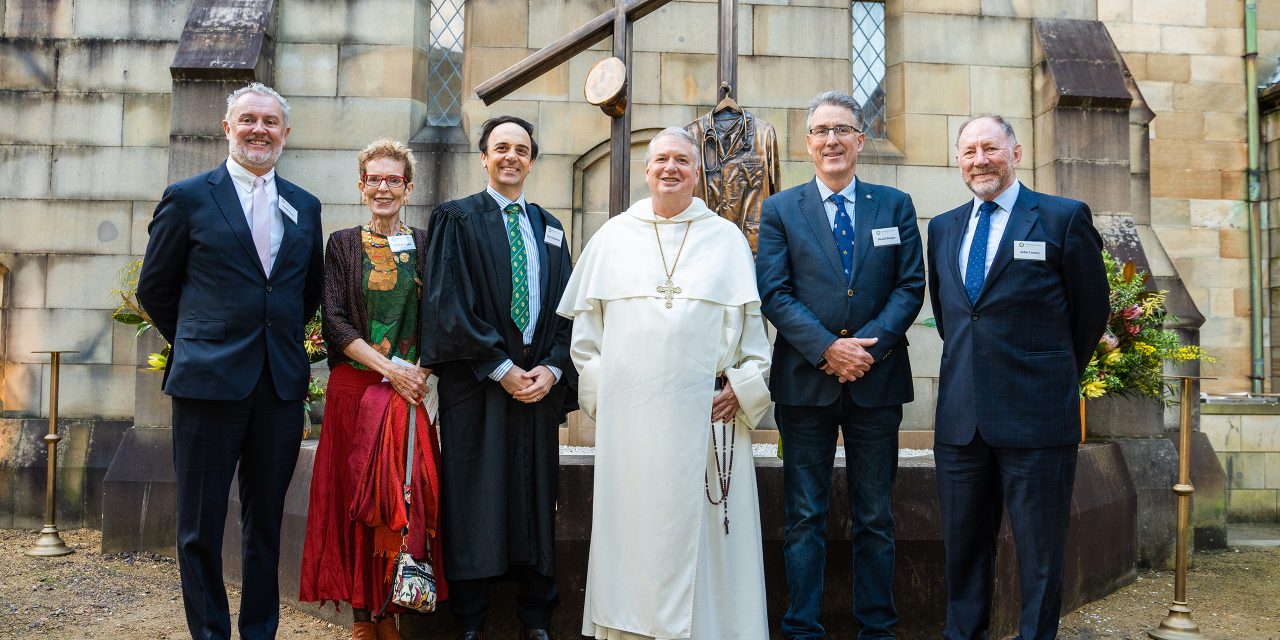 On Sunday 28 August 2022, the College unveiled and dedicated a memorial to one of our most illustrious alumni, Major Dr Kevin James Fagan AO (1909-1992). The dedication was attended by the Archbishop of Sydney, His Grace Anthony Fisher OP, Dr Brendan Nelson AO, former Director of the Australian War Memorial, Major General Charles New, Lieutenant Colonel Nicholas De Bont, Mr David Pacey, representing the Vice-Chancellor, members of Council, members of the Fagan family, sculptor Louis Pratt, the Rector, alumni, other staff of St John’s College and other Sydney University Colleges, and students.

On a warm and sunny winter’s Sunday afternoon, approximately 150 people gathered in the College Quadrangle to unveil the memorial. The proceedings commenced with a welcome from the Chair of Council, Mr John Coorey, who led the vision to make the event and the memorial happen. The next speaker of the day was Dr Mark Schembri, who gave his first official speech as the Rector of St John’s College. Dr Schembri spoke of the great Johnsman, saying:

“Dr Kevin Fagan represents the best of St John’s College: faithful, hardworking, generous, talented, humble, and a man who used his learning and skill not for his own benefit but for the benefit of everyone around him. With his needle he stitched back together what man had torn apart; and at the tip of his scalpel, death gave way to life. He was a light in the world and a pillar of virtue in the face of unimaginable adversity. While I hope that none of our students will have to face the horrors of war, it would be naïve to think that they are now immune from its shadow. What we can hope and work and pray for is that at St John’s our students will be formed into men and women who will, like Dr Fagan, shine in the darkness.”

Dr Brendan Nelson AO spoke with authority and passion about the life of Dr Fagan, described by many attendees as one of the best speeches they had ever heard. Dr Nelson spoke of the importance of history and the significance of great character as a defining feature of Dr Fagan’s life:

“A sense of history, a sense of those who gave us what we have and made us who we are, is essential to any understanding of the future. When little else in the world makes sense, drawing on those whom we honour from our past, reminds of where in our best selves we know we need to go. The work that Louis has given us, inspired in telling the story of Major Kevin Fagan, speaks not only to those who will walk these cloisters for decades and beyond, of sacrifice and leadership, but it also speaks of what in my experience transcends everything else: and that is character. Transcending rank, power, money, influence, looks, talent, intelligence, is character informed by worthwhile intrinsic virtues and values. In Kevin Fagan’s case, courage — that spirit that challenges doubt — imposes will, protects integrity, advances values, and ultimately allows us to break through fear. Moral courage, physical courage, and endurance — no matter what, you never give up. Sacrifice — for a life of value is spent in the service of other human beings, even perhaps to the cost of your own life. Compassion — to be imbued with the imaginative capacity to see the world through the eyes of other human beings. And as is often, but not only, born in the context of conflict, mateship — the spirit that binds us as Australians in the face of adversity no matter what.”

The Archbishop of Sydney, His Grace Anthony Fisher OP, followed with another extraordinary speech reflecting on the good life, the significance of martyrdom, and Dr Fagan’s embodiment of the three theological virtues:

“[Dr Fagan’s] human gifts of intellect, athleticism, leadership and charm were paired with theological virtues of faith, hope and love and expressed in that most Christian vocation that is healing. Treating an inordinate number without the drugs, equipment and conditions he needed in the camps, he exhibited a kind of compassion that meant each prisoner felt like they were his only patient. He shared most of his rations with others, and seemed to live on air, such that some thought him more angel than man. … I am delighted that the quadrangle in St John’s College will now remember this great man, who lived like his divine Master, giving himself so others might live. If ever there was a good life, this was surely one. And so here, before his surgeon’s coat upon a prison cross, at the going down of the sun and in the morning, we will remember him.”

After the Archbishop’s speech, the memorial was unveiled. Mary-Jean O’Doherty, the current Dean of Student (Arts) at St John’s College, along with College cellist, Mr Christopher Bennet, led all present in the singing of the hymn “Abide in Me”.

The College is immensely proud of the work of the sculptor, Louis Pratt, and the memorial speaks to his talent, creativity, and the respect he showed to Dr Fagan. Louis then spoke about his sculpture:

“This memorial sculpture brings together symbolic ele­ments that commemorate the life of Dr Kevin Fagan AO. The materials are bronze and 24-karat gold leaf surround­ed by white stones of a Japanese peace garden. The railway track formation is a level crossing, embodying both Dr Fa­gan’s faith and the railway that the POWs laboured to build. The cross is a healing force for all those who suffered in the construction of this railway track. A railway spike, sourced from the Burma railway, acts as a coat hanger from which hangs a doctor’s jacket. Embroidered above the pocket is his name, Dr Kevin Fagan. On the other side of the track is an Australian Army Medical Corp of­ficer’s hat. This hat would have identified Dr Fagan’s rank as a Major in the Second World War. At the base of the cross are five eggs gilded with 24-karat gold. This element epitomises Dr Fagan’s generosity and sacrifice, as detailed in the many stories of his character, one of which tells of how he gifted five eggs to a fellow soldier when starvation was all around. All these elements rise from a Japanese peace stone garden, putting to rest the turmoil of the Second World War.”

At the conclusion of the proceedings, Louis presented the Burma Railway spike to Chair of Council Mr John Coorey. The spike was gifted by the Depart­ment of Veterans’ Affairs.

“Let me be clear, there was much to be loved in Kevin Fagan as a father. Despite a legacy of significant chronic ill-health, he was not broken by his wartime experience, nor did it leave him cynical about humanity. He was a patient, even tempered, and gentle father – a practical man with a good sense of humour, a winning smile, and twinkling eyes.”

Dr Fagan attended St. Ignatius College, Riverview on a bursary, and was Dux of the school in 1925 and 1926. He was then a resident at St John’s College from 1927-1932 while studying medicine at the University of Sydney. After his graduation, he became superintendent of Hobart General Hospital in 1937. Shortly after the outbreak of World War II, Dr Fagan joined the Army Medical Corps and was posted to Singapore in 1942. Upon the fall of Singapore, he was made a prisoner of the Japanese, first at Changi and then on the Thai-Burma Railway.

Dr Fagan’s obituary in the Sydney Morning Herald reported that colleagues hailed him as a legend and a saint. He was, in the words of fellow veteran Les Cody, a “Horatius at the bridge of life” for the many hundreds of prisoners he treated in POW camps and on the Thai-Burma Railway. Such was his popularity amongst the men that when he fell ill at Syme Road Camp (with cerebral malaria) half-hourly bulletins were issued on his condition until he recovered.

The College is honoured to have dedicated this memorial which, like its namesake, will enjoy a permanent place in the history of our College.