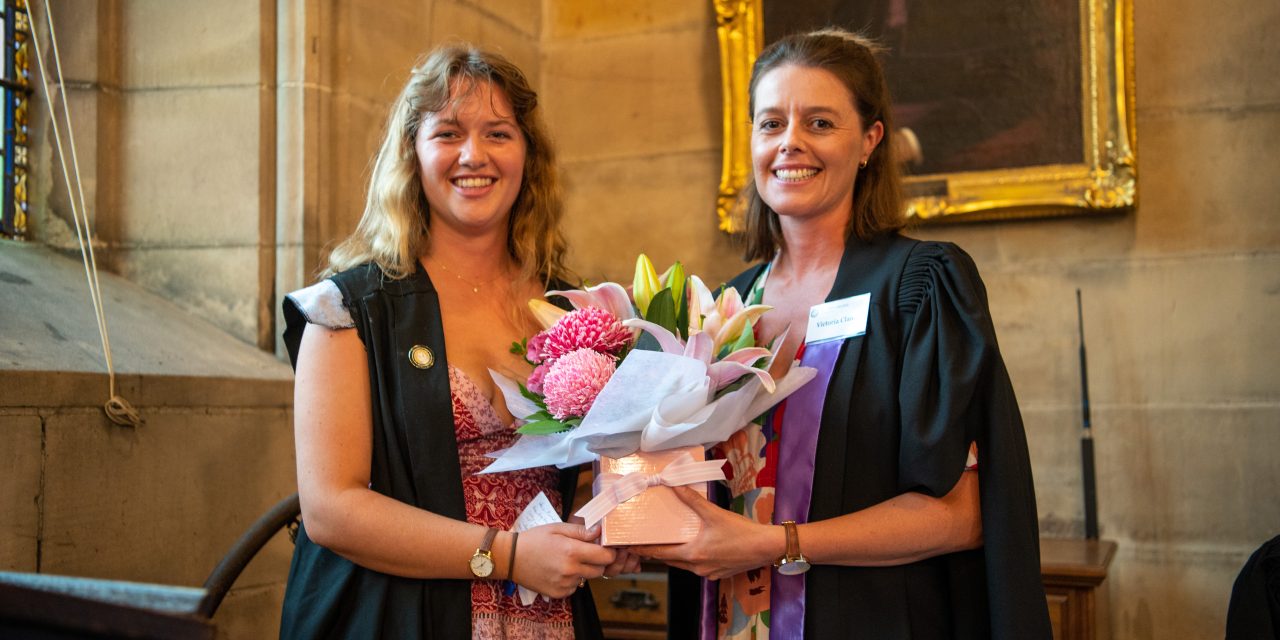 Celebrations for 20 Years of Women Students kicked off on International Women’s Day.

On Monday 8 March, St John’s College was pleased to kick off celebrations for the anniversary of 20 Years of Women Students on International Women’s Day.  A special Formal Dinner was held for the occasion, and we were very lucky to welcome Ms Victoria Clancy – a distinguished St John’s Alumna – as a guest speaker.

Ms Clancy is a Child Protection in Emergencies Specialist who has worked for UNICEF for the past ten years, currently as the Australian Bushfire Response Coordinator, and most recently as the Child Protection Coordinator in Ethiopia for the humanitarian response to the more than 3 million people displaced in the country due to internal conflict and drought. Prior to her appointment in Ethiopia, Victoria led the Family Tracing and Reunification (FTR) and Children Associated with Armed Forces and Armed Groups (CAAFAG) Working Groups in Gaziantep, Turkey as part of the Whole of Syria response. From 2014 – 2016, Ms Clancy worked in Uganda on the multiple, concurrent refugee responses as well as leading child protection emergency preparedness for natural and complex disasters. In the Philippines, Ms Clancy was responsible for UNICEF’s engagement with the UN Action Plan to end the recruitment and use of children in armed conflict.

Ms Clancy gave a thought-provoking speech reflecting on the challenges she’s faced in her line of work and encouraged all St John’s students – both men and women – to use International Women’s Day and the College-wide ‘20 Years of Women Students’ celebrations as a catalyst to think critically. She emphasised that uncritical acceptance of structures, beliefs and practices can limit, exclude, and damage, and can stop people from fulfilling their full potential. She encouraged St John’s students to open themselves up to different perspectives, learn and reflect on what role they personally can play in creating a more fair and equal society.

Following this rousing speech, the Rector spoke and formally presented ‘20 Years of Women’ commemorative pins to everyone in attendance. The College was glad to mark this anniversary with a special keepsake, and since the event students and staff have been sporting them with pride!

20 Years of Women Students is a momentous milestone for the College, and we’re delighted to celebrate it while our future is looking so bright! The College welcomed its first cohort of women in 2001, and since then demand from young women to be a part of our community has grown in leaps and bounds. The first cohort of women numbered less than 40, and to date more than 1000 women will have called St John’s College their ‘Home of Joy and Bliss’. Today, women comprise roughly half of both our student body and student leadership.

St John’s College is proud to celebrate our vibrant community and 20 years of men and women living and working together as equals. Here’s to the next 20!