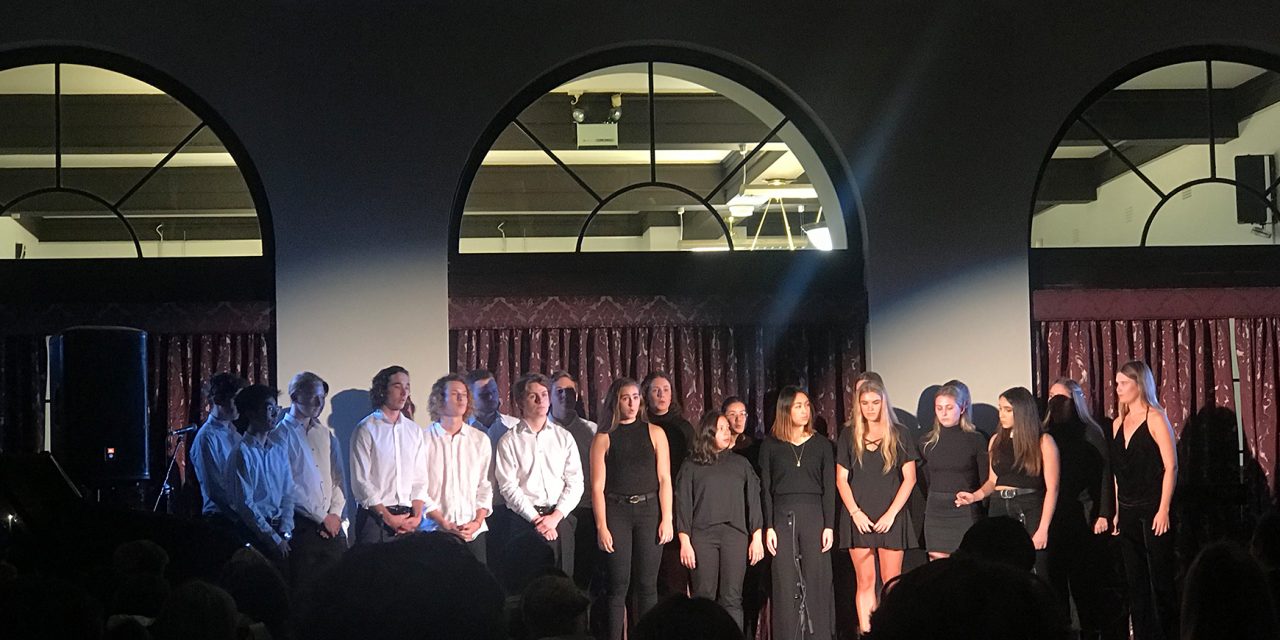 On the evening of Tuesday 27 August 2019, in the Rectory of the Holme Building, the singers of St John’s College were awarded 1st and 2nd place in the Palladian Vocal Ensemble competition. Women’s came 3rd, for a well-executed version of Mama who bore me by Sheik. Remarking on the high standard of the competition, the judges singled out two ensembles for the ‘highly commended’ accolade: Wesley for Orange Coloured Sky by Puddy – a catchy jazz number sung by a seasoned vocal quartet – and St Andrew’s for a beautiful duet from Mozart’s opera, Don Giovanni.

In marked contrast to the muggy conditions that had plagued the solo vocal and solo instrumental competitions in March, the winter weather provided a much cooler and more pleasant environment for the audience. As before, the Refectory was packed to the rafters with College supporters. None were there in greater number than the residents of St John’s College.

Comic relief was provided by St Paul’s College with The Lion Sleeps Tonight by Tokens. Gentlemen in ‘onesey’s’ appeared from the audience, hopped on stage and crawled about on all fours, as “Dr Livingstone, I presume” sang earnestly about how the fate of the world’s wildlife depended on the good will of Walt Disney.

There were many fine performances from Sancta and the other Colleges, each providing two entries apiece. But, if I may be excused for saying it, there was no real competition for John’s. Our first number was Run to you by Pentatonix. It was sung by an unaccompanied sextet, which included Cassie Lobb,  Xavier Lynch, Jonathan Shea and their friends from the College. Unlike the most other entries, there was no conductor, and no instrumental accompaniment. The piece was complex, big, and emotional. It showed off the ensemble’s ability, not only to hold their intonation while executing difficult passages, but also to communicate with each other, by turning to face each other, and using their eyes and ears. It was no surprise that this performance was awarded 2nd place in a very competitive field.

It was outdone, however, by the College’s full ensemble. They sang a piece sourced by Cassie that neither I nor the judges had heard before – Heavenly Father by Bon Iver. Again, no scores, no conductor, no instrumental accompaniment. None was needed. These guys were consummate performers – the whole lot of them, and there were many. Again, they communicated with each other – in much greater number this time – with their eyes and ears. After a quiet entry consisting of fifths and a clear pulse, the ensemble built slowly to a huge crescendo, then shocked the audience with an explosive percussion, achieved simply by slapping their thighs and slamming their heels into the stage consecutively. After the emotional climax, they died away almost to nothing, with the chanted prayer in parallel organum, “Our safety in the end”. Trust John’s to win with a prayer. 1st place. No one was surprised.

At the end, after the hall had emptied, the singers joined with their many friends from the College to form two concentric circles for the College victory chant. It was immediately apparent that half the hall had been filled by St John’s College. They shook the rafters.

Congratulations to all the John’s singers for their historic win – I cannot remember our ever taking the top two positions in this comp before. Congratulations to Cassie for all her months of hard work in bringing the ensemble together, and rehearsing it. John’s is now the College to beat, and is a contender for the Palladian Cup itself.